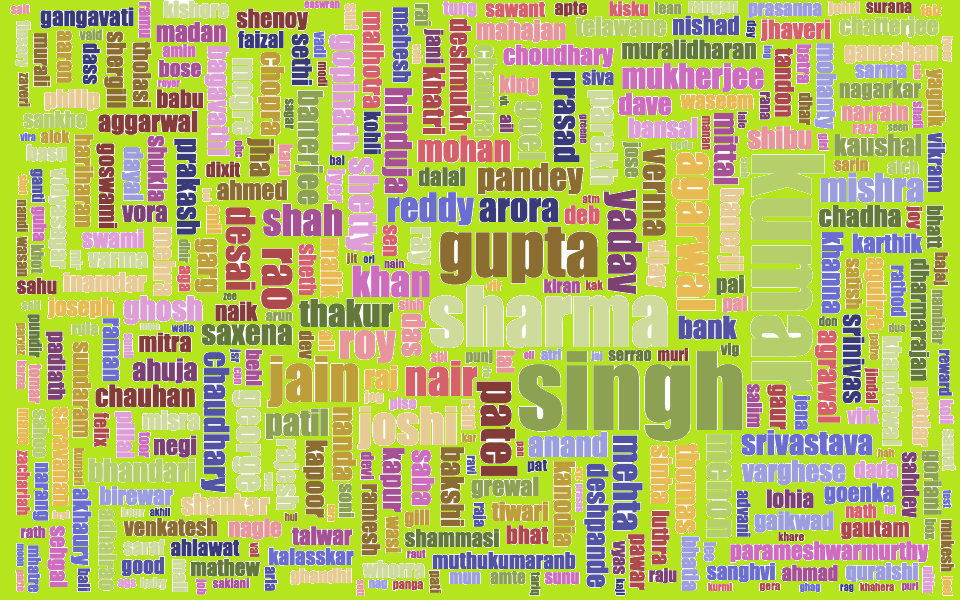 What’s in a Name?

During one of those contemplating sessions in my mind I began to wonder what exactly a name was.  I thought it is so simple what is there to ponder about… but the more I thought the more confused I became. So I checked the big Oxford English Dictionary and it began with, “a word or set of words by which a person or thing is known, addressed, or referred to” and to my amazement I found that the definition of ‘name’ ran for almost five pages!

I began to understand that the names are an interesting phenomenon and not only used to identify who we are but also whose we are. Often our names are linked to our background, culture, heritage etc. We have first names, and many of us have middle names and last names. The Indian passport apart from other things identifies one by the ‘given name’ and the ‘surname’. Any variation in spelling here would put one in all sorts of trouble. We also do not want our names to be violated in any way. We behave as if we ‘own’ our names! Have you ever addressed a person pronouncing his/her name wrongly? The reaction is usually that of annoyance. We don’t like people to get our names wrong. Some deep seated feeling makes a child hesitant to tell its name to strangers.

“Who hath not owned with rapture smitten frame

The power of grace, the magic of name?”

We talk of earning a good ‘name’ and we fear of losing it!  A dog is given a bad name and then hanged. In the “Old Possum’s Book of Practical Cats” by T. S. Eliot, a cat is discovered in deep thought, (as cats often are) it is said, “His mind is engaged in a rapt contemplation of the thought, of the thought of his name”

Shakespeare could not have been more wrong when he wrote, “A rose by any other name would smell just as sweet”, especially as this line appears in the play, “Romeo and Juliet’, where the entire action revolves around the names these star crossed lovers bear! Would Juliet have addressed the anguished Romeo “O wherefore art thou Romeo” to a suitor otherwise named?  A moot question…  A bird differently called could not have evoked the rich outpouring of melancholy strains, familiar to all of us as, “Ode to a Nightingale” The point is that the names rose or nightingale have a potential to stir countless number of people across the globe who know nothing about their origin and care less. And what is true of the denizens of the inanimate and animal worlds is all the more true of the humans.

I remember a dispute years ago with a friend as to how a certain word should have been pronounced and to settle the argument I quoted the authority of the “English Pronouncing Dictionary” by Daniel Jones. I recall even more vividly the facial expression with which she reacted to that piece of information – an utterly memorable mixture of incredulity, disdain and amusement- a modern day emoji would have taken a cue from her! It was not that the renowned phonetician’s base, the University of Zurich was in contention it was the name “Jones”. She would have readily accepted a “Johnson” (one thinks of Samuel) or a “Webster” but a common garden Jones is definitely out!

A study conducted by German researchers, found something interesting about the names. These researchers sent 47,000 emails to online daters and found out that people tend to go for attractive names. The best part? These emails did not include photos, but only names and a general introduction. This proves how important a name is… Women with attractive names are seen as physically attractive too. How true Randolp Quirk, the well known linguist is when he talks of, “the deep seated fierce unreasoning human dependence on names”.

Naming ceremonies all over the world are usually conducted with great care and often with solemnity and the name itself is chosen after considerable thought. The aspirations of parents or grandparents are reflected in the choice of names for a child. Believe it or not, people often tend to think that they have a unique name that hasn’t been chosen by any one. But the fact is otherwise… When I Googled my name complete with the initials, I found four living people with my name. I was surprised because the double ‘s’  at the end of my second name, ‘Christadoss’ was an accidental insertion by my school on the SSC! Not just that- two of them like me have been Lecturers in English!

Talk of names and their significance… !!!