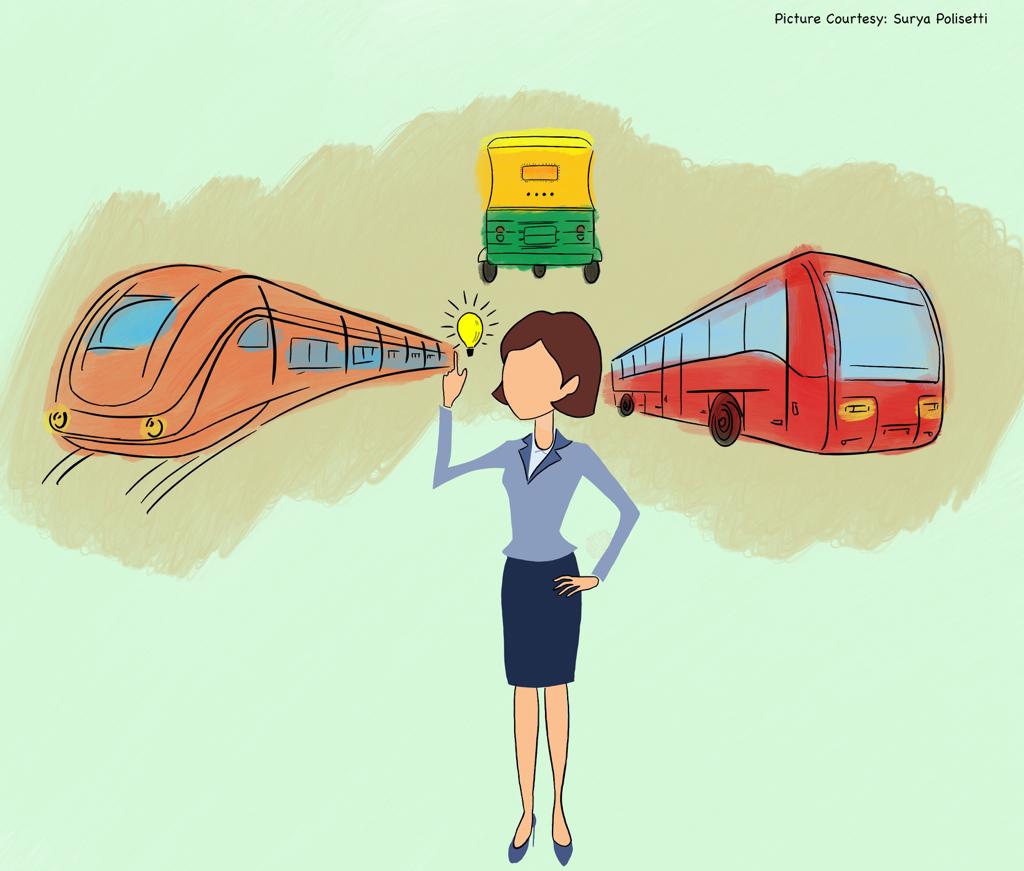 Life has become so much easier after public transport developed in most cities. I remember my grandma telling me how times were back then when the only way to reach a relative’s house was by a bullock cart or a human-pulled rickshaw. Some people walked to work, while others took whatever transport options they had then. Over time, people started traveling by buses, trains, auto rickshaws, cars and other faster modes of transport. Today, there are very few who have the luxury of being able to walk to work.

Have you ever thought that your daily journeys could develop certain skills? Do you observe the surroundings while you travel? Have you had an entertaining or annoying experience during your routine travel? If yes, you will relate to what I share below; if not, then sit back and enjoy journeying along through this article.

One Monday morning, inspired by a WhatsApp forward on how the Japanese are disciplined, organized and mindful of each other even while commuting, I decided to practice being disciplined and mindful. (You see, I didn’t want to be over-ambitious and so I dropped the organized part!) One of the clips had showed how the Japanese passengers waiting on the platform gave way to the passengers getting off the train, thus ensuring peaceful movement of passengers in and out of the train without any hassle. So, I was now waiting at the bus stop, determined and excited to act on my new learnt travel discipline and to set a noble example for my fellow commuters to follow.  Soon, the bus arrived but it was almost empty. There were very few who got off the bus and I could easily enter the bus, denying me a chance to set a good example to others. I was (and still am!) a determined soul, and so I decided to wait for my chance in the evening. The whole day I was looking forward to my return journey.  The day was hectic, but nothing could take my focus away from being disciplined. And, mindful! As soon as work got over, I rushed to the bus stop in all excitement. I was tired but I gathered all my energy while waiting to act as decided. The bus arrived later than usual and, thankfully, quite crowded. This was the opportunity that I was looking for. I stood aside holding the pole on the left side of the door of the bus, holding back the urge to place my foot on the footboard. Strangely, no one seemed to notice my example and commuters were getting in and out, simultaneously both blocking the way for each other and yet, managing to enter and exit the bus. Determined, albeit a bit perplexed, I patiently waited for another 40 seconds for my model behavior to be taken note of, for that to sink in to the minds of fellow passengers and then, transform everything we know about bus travel today in Hyderabad.  But, believe it or not, in no time, others who were waiting with me were now in and the bus began to accelerate, and I had to leave the pole, let go of that bus and get back to waiting position. In hindsight, it appeared like I was an idiot who just escorted every other passenger to the bus. I surely need to watch that clip again to see how the Japanese do it!

Imagine, after a long and tiring day, when all you want is to go home and crash on your bed, you are deprived of that precious seat in the bus/train?  What can be worse, right? However, eventually, you realize there are many others in the same boat, sorry, same bus/train who are as tired and seat-deprived as you are.  People traveling in Mumbai local trains reserve their seats prior by asking a seated passenger about their destination.  One who has survived entering into a Virar Fast Train in Mumbai can endure anything in life. And, you don’t have to walk towards the exit door in a Mumbai local train. When you think you have to get off the train, you don’t have to even say abracadabra, for you would’ve already been transported to the platform by the mind-reading crowd!

In Hyderabad, a vast majority of daily commuters for work prefers the buses run by the RTC (Road Transport Corporation).  Incredibly, the driver never finds his bus overcrowded and the bus halts at every stop. The driver has supernatural vision that sees extra space in his bus, which neither you nor your mosquito will ever find.  The conductor is the only entity who manages to move back and forth, and while initially you think it is a struggle for him, you later suspect that he enjoys the whole thing, probably having become an expert after practicing movement through a needle-eye at home.  Crowded buses help one identify the magical power of balancing the entire body on one’s toes. As a tradition, the standing passenger shall always transfer the luggage (unalarmed) to the sitting one. Then, there are some passengers who – having probably been blessed with the same gene mutation as the super-sighted driver – have the ability to spot an extra inch of space on a seat that you have already occupied and shall make themselves unapologetically comfortable in that space, only for you to find in sometime that you are sitting in that extra space which never existed.

How do you behave when you have been starving and out of nowhere, delicious Biriyani appears in front of you? That is exactly what happens in a crowded bus when suddenly you see a ray of hope,  the darkness vanishing from your surroundings, and you zoom in to the comforting, warm, enticing image of an empty twin-seat,  beckoning you to fulfill its yearning for you. Travel in a bus teaches you to be focused and observant.  Every standing passenger is aware of who among the seated passengers is getting off next. At the same time, s/he is also aware that every other passenger standing too has his/her eyes on the next available seat. Such situations call for spontaneity and alacrity, and you get to demonstrate your agility and flexibility.  I am ever-so-grateful to my physical education teacher who persuaded me to play kho- kho and four corners, which now enable me to grab a place in the bus where you have multiple corners. But, while at the end of playing kho-kho fiercely competitive players go back to being friends again, that can never happen on a bus. The one who lost the place to you shall look through you with their angry red laser-beaming eyes and will mumble curses upon you until they get down at their stops.

If you are short in height and you still venture out to travel by bus, then you have a number of smells that you have appropriately classified and stored in your grey cells.  On the one hand, there are fragrances: fresh jasmine flowers, strawberry, citrusy lemon,  mild rosy cologne, lifebuoy, cinthol, cuticura, mysore sandal, fair and lovely, ponds and so on; on the other hand, stink like rotten egg, curdled milk, darkened banana, sour citrus fruits, and sweaty odours from every corner of the bus/train. Any number of layers, whether made of stoles or scarves or bullet-proof masks, can’t prevent these smells from reaching your nostrils. There is no escape from this unless you can hold your breath till you get off or find a window seat. Don’t ever forget to take bath once you reach home lest you end up smelling like a rotten fruit basket.

Sometimes one is lucky enough to get a place to sit, especially a window seat.  Window seat is the closest to what can be described as private space when it comes to public transport. If you are fortunate enough to find one, you can keep your earphones plugged in and have your music on, close your eyes and relax until your stop comes.  But, then comes the loudspeaker. Every single time you find a window seat. Inevitably so! You may have plugged in the best dolby earphones with amazing stereo sound and noise cancellation, but nothing, absolutely nothing, matters once a human loudspeaker has boarded the bus.

One of my most annoying experiences was when I came across this loudspeaker that got into the bus at Ameerpet.  Each of us, including the driver, thought her conversation was with us, but it was with someone else on the phone. That bus had a divider that separated the front space meant for ladies from the rear side meant for men and there was some space behind the last row of seats meant for ladies ahead of the divider. I was there lost in listening to my favorite songs and I didn’t notice the loudspeaker coming my way. Little later I started feeling some heaviness on my shoulders and some murmuring around my ears. I opened my eyes and saw two bony elbows resting on my shoulders and her head close to my ears. I was fuming and my anger was evident from my look, but all I could manage was to get her stand erect for sometime. The chatter continued unabated. Everyone in the bus appeared tired, having worked all day, yearning for some silence and peace, which the loudspeaker obviously denied, but no one had the energy to protest.  By the end of the journey, not one soul on that bus, how much ever they wanted, could erase the details of the loudspeaker’s life from their minds as her narration had left their imagination go haywire.

Each of us must have been through scanners at malls, railway stations, metro stations, airports and other public places. These scanners are required for our own safety and security. But, please don’t think that there are no scanners on public transport. There are… human scanners. By now, many of us frequently travel on metro trains. I am sure you too would have observed this. As the train pulls into the station, all that your tired self can think of is to get inside the train and go home as quickly as possible. The train comes to a quick stop, the doors open and you almost sleep-walk into the compartment, only to realize that you have become the center of attraction for many. The other day,  well, like almost every other day, my friend and I noticed nearly two dozen unknown people staring at us as if we were a new (or extinct?) species. What I have come to realize is that it is not only men who look at women’s feet first, but also many women who follow the same sequence from feet upwards.  Once you are seated, you notice men and women of different kinds: the inquisitive ones with enlarged pupils who can browse through your phone without touching it, the outfit admirers who can make you feel judged by what you wear, cranky faces who make you think that your day certainly wasn’t as bad as theirs, day-dreamers so lost in self-amusement that they miss getting down at their stops, and of course, the new metrorians, whose confused excitement makes you wonder if you are going home or if the train is taking people to the Disneyland in Paris. My friend and I have chosen, nay, solemnly resolved, to enjoy every aspect of our evening journey.

Travelling is productive, irrespective of why you undertake it in the first place. If you are taking a vacation, you relax during the trip and return rejuvenated. If you travel for work, you learn much about yourself and others.  I think I’m not exaggerating when I say that every journey one takes, helps one develop several life-skills and takes one closer to realizing one’s self-potential!!!

If any of you now regret not having taken public transport or think that you have missed out on valuable life lessons, do not be disheartened. Hyderabad Metro Rail is at your service.