The science and sci-fi of black holes

The film Interstellar is a lavish space romp which sees Mathew McConaughey jump through a worm hole, navigate space-time and tumble into a black hole in his quest to save humanity. Director Christopher Nolan was keen to get details right and enlisted the help of renowned US astrophysicist Professor Kip Thorne.

So did Nolan and Thorne manage to prevent science fact being eclipsed by science fiction? Not entirely.

As Thorne points out, “Some of the science is known to be true, some is an educated guess, and some is speculation.” 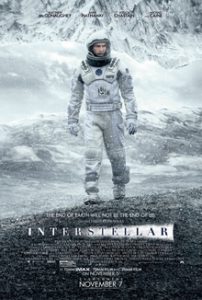 Time can be warped in space – TRUE

One of the main themes in Interstellar is that characters can age at different speeds depending on where they are in the universe. When McConaughey (Cooper) and Hathaway (Brand) make their ill-fated trip to Miller’s planet they age by only a few hours, but return to find shipmate Romilly, is 26 years older. Could that be true? Well yes. In 1912 Einstein predicted that gravity is a product of huge bodies, like Earth, bending space-time. The typical illustration is a heavy ball placed on a rubber sheet. The sheet bends to the weight of the ball and stretches time out.

On Earth the effect is minimal, adding just a few microseconds a day to the time of space. Consequently GPS satellites orbiting the Earth need to be adjusted to take into account that they are moving through time slightly more quickly – 40 microseconds a day – than a person with a Sat Nav on earth.

However bodies with more mass have a bigger impact on time. A neutron star for example is so dense that it slows time by a few hours. At the surface of a black hole time is slowed to a halt.

Slingshotting around a Neutron star- FALSE

The crew of Interstellar’s Endurance spaceship faced a headache when trying to get to Miller’s planet because it is trapped within the control of the huge black hole Gargantua. To avoid being sucked into the black hole, the spaceship had to be travelling at high speed to escape the huge gravitational and centrifugal forces. In Interstellar, Cooper gets round his speed dilemma by slingshotting around the black hole.

Actually this isn’t as wacky as it sounds. In fact the Rosetta mission skipped around Earth and Mars to pick up enough speed to chase comet 67P Churyumov-Gerasimenko.

However, the speed needed to escape something as massive as Gargantua is huge. The Endurance would need to be travelling at close to the speed of light to escape the huge pull of the black hole, and then quickly slow down so it could land on the planet. The sudden change in momentum would almost certainly tear the ship apart.

In Interstellar, the crew uses the slow spin of Neutron star to slow down, but it is unlikely to work. Only another black hole, around the size of the Earth would have been able to slow the craft down.

The film depicts the huge black hole of Gargantua as a black circle surrounded by a swirling mass of stars and galaxies, almost like a human eye.

The distortion of the stars, known as ‘gravitational lensing’ was generated by computer models. In fact, the computer simulations were so accurate that Thorne and the team discovered that black holes are slightly concave on one side and have a bulge on the other. It is the first time the phenomenon has ever been seen, and Thorne has now produced a scientific paper detailing the discovery.

The black hole depicted in Interstellar is probably the only known accurate example of what it would look like to a human if you could ever get close enough to view it.

In Interstellar, the crew overcame the vast distances between galaxies by jumping through a wormhole.

The term wormhole was coined by the astrophysicist John Wheeler who based it on wormholes in apples. If an ant is crawling around an apple, he could reach the other side far quicker by travelling through a hole in the centre. Essentially, a wormhole is where space and time are being bent so that points are now closer together.

They can exist theoretically but nobody knows how they could be held open so that someone could travel through it. It would take a huge mass, like a Neutron star, to create a bend in time which could push into ‘the bulk’ and meet up another such tunnel on the other side. So far, nothing has shown any signs of being capable of doing that.

Prof Thorne adds: “I doubt the laws of physics permit traversable wormholes. If they can exist, I doubt very much they can form naturally in the astrophysical universe.”