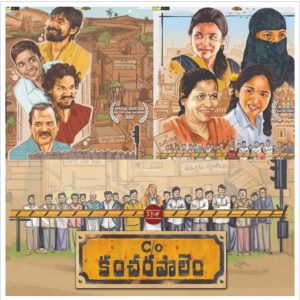 After watching this Telugu movie titled C/o Kancharapalem 2018, that I found fairly well-made, I was prompted to reflect upon a few trends I see developing in our culture. It begins with multiple narratives centered on apparently different lives which converge at the revelatory moment at the end of the movie as being the life story of a single individual. Each story depicts the different episodes of the lead character’s life at different ages. These episodes do not just show us the character at different stages of development but the various identities he takes on in his life journey, only to end up with an enlightened philosophy of life which is the central concept of the whole movie. At each stage, he grows disillusioned of religion or society disheartened by his love failures.

This movie is seemingly an intimate account of the individual encountering institutions, ideologies and groups in society. The fact that one does not register the narratives as being about a single individual until it is revealed at the end is telling of how the character’s self is really fragmented. Despite this radical discontinuity between each personality we meet in each episode, the film’s focus seems to be about an individuals triumph over external societal persuasions. If this is about the self, it is about a fragmented and scattered self, and this is something to offer one’s thought to.

As I watched it, the English movie, Boyhood (2014), came to mind as it is similar in focusing in on the subjectivity of one boy through his growth and development into adulthood. In both movies, the societal structures and institutions form the background of the protagonist’s life but there is a stoic sense of distancing that is occasioned so as to give a subtle sense of transcending one’s environment. This will be highly appealing to a contemporary audience given the constant disillusionment and alienation one experiences in any participation in organized religion or conforming to a particular ideology. The endless fodder that the media provides over the dismal state of affairs of ‘religion’ as a modern reality helps feed this growing sense of cynicism, especially in the youth. The prominence was given to the self, even a splintered self, and it signals to the growing individualism in society at large.

The moral of the story is the tired old individualist creed occasioned in works as diverse as the lyrics of John Lennon’s song ‘Imagine’, and in Emerson’s boring essay ‘Self-reliance’ and the innumerable songs, movies and other cultural productions that provide a rationale for teen-rebellion in the West, which we could imagine as novel or needed in our country, if we were to take this vein of thinking as somehow liberating. The underlying theme boils down to a simple message: Imagine if there was no religion… we could all be better human beings mining virtues like love and brotherhood from the recesses of our inner “deep” selves and reaping good wholesome well-adjusted lives unencumbered by the excesses of religion or society’s arbitrary standards.

The person who holds to such an optimistic view of the self, most definitely contrasts his enlightened self against a larger unenlightened and ignorant mob of a society mindlessly subscribing to and succumbing to various ideologies, institutions, and religions and thereby creating unnecessary pain to oneself and others. Having divested himself of any such burdens that plague the masses, he imagines himself to have found a haven in some half-baked philosophy of living that apparently has a pragmatic function in one’s personal existence.

It seems simple enough and a sensible thing to align oneself to, on a surface level, but in my observation of anyone who holds to such a creed, though they would deny it to be one, is that despite their claims of inwardness they are extremely averse to self-examination. The character in question is such a person. The kind of faith he rejects as a child, one of making a wish and throwing a fit when things do not go his way,  colors the way he looks at everyone in his life who is religious. The old naive self he seemingly rejected is what he projects on to everyone in his life. This has a similar symmetry to the biases of a person with such an attitude shown in the movie, where the other characters are flattened out as mere soulless representatives of some religious tradition or societal structure or communal agent but our hero, as is everyone with such an opinion of oneself, is the dynamic self with an inwardness and depth others less fortunate failed to attain.

In each parallel narrative, we are shown the main character falling in love with a girl and investing his faith in a particular religion or societal standard. The relationships he enters into can be compared to his engagement with that particular faith. The diety he engages functions merely as a means to an end or an accidental backdrop of what he was really pursuing in life, the relationship with the girl. One is tempted to wonder if his relationships were as transactional as his religious beliefs appear to be. This reductionist view of religion lacks any real inquiry into the veracity of each faith that was showcased but only show a facile engagement of the question of why people really hold to faith. That leads to the real question of whether our hero really changes on a fundamental level or does he just trade an infantile belief in exchange for an attitude that is not all that dissimilar to what he had before as a person of faith.

As a child, he is shown to throw a fit when things don’t go his way. This is how many people approach religion or life in general in contemporary reality. Such movies, of which PK is another, clearly expose the self-interest and superficiality in a religious mindset. Now, the question remains to be asked whether what they offer in exchange, as a more rational or sensible alternative, is really what they show it to be. Does the abandonment of religion lead one to a higher plane of ethicality, immune from the abuses we find in religion?

The undue attention given to the self here needs to be examined. Is it the real him or the self that is filtered through his perception of himself. The perspective is definitely of the lead character as we get very little peeks into selfhood of the other characters and they remain flat props helping to highlight a point or to show how their behavior has affected the lead character. This ironing out of the complexity of others is consonant with the growing navel-gazing subjectivity in the urban spheres. It is not a matter of coincidence that the woman proposes and he seems to be blissfully unaware of the chemistry developing between them. The movie’s protagonist shows a peculiar trait in such people. Their inability to fully feel themselves at home or fit into the world. He has trouble marrying and is seen as some pariah in his community. The fact that he does not fully fit in could be for reasons arising from within and not without. Individualism, like anything imported from the West, has its problems: a sense of alienation or a growing sense of being isolated due to one’s opinions. I am not advocating collectivism here, but pointing towards a less obvious collectivism under the banner of rationalist or individualist values.

In this schema, one is religious because one is afraid, one is religious because one is alone and seeks company and one is religious because one is accultured to be so, or so it is believed to be. All the above may be true, but it is conveniently generalized and explained away as being true of all religious people. Reductionism at its best. My point is not that religious people do not have these issues but that the secular self is as susceptible to the vices it decries in others. The only thing extraordinary about such a person is what he or she believes about themselves. The solution, almost all the time, is not any sort of solution at all but an adherence to a self-made ideology that has the sole advantage of being one’s own choice. One resorts to constantly highlight the silly and ridiculous things happening around him that are attributed to religion and this somehow becomes the source of identity construction for the individual. Pitting the individual against an unthinking world is another trope in these movies that syncs quite well with the alienation experienced by contemporary self. What appears to be an unshackling of the self from restricting forces from without is, in reality, a mere exchange of a belief for another, only more unconscious than the former. All of this is an extension of the identity politics that plagues this age than any quest for reality or “rational” truth. The larger questions about life are left by the wayside in pursuit of identity to view oneself as wiser human being transcending society. All it spawns is a breed of self-professed enlightened individuals who are in the process forming a new polarity in our diverse culture. They end up furthering what they were running away from, another group of individuals centered on a set of attitudes and opinions instead of religious affiliation. We only need to look at the West to witness where this would lead. Shakespeare’s line from Hamlet comes to mind “There are more things in heaven and Earth, Horatio, Than are dreamt of in your philosophy.”

This assessment has solely been of the philosophy or the underlying message of the movie that fuels a particular strain of thinking in some people and not its many merits in how it was made.