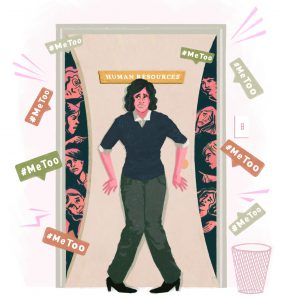 The Me Too movement (or #MeToo movement), with many local and international alternatives, is a movement against sexual harassment and sexual assault. #MeToo spread virally in October 2017 as hashtag posts used on social media in an attempt to demonstrate the widespread prevalence of sexual assault and harassment of women, especially in the workplace. This later on extended in addressing the issues faced by men too, making the movement free from gender bias. It took a steep, soon after the sexual misconduct allegations against Harvey Weinstein and Tarana Burke, the American social activists came into the limelight. That marks as the beginning of usage of the phrase “Mee Too”, though it began as early as 2006, the phrase was only popularized by American actress Alysssson Milano on Twitter in 2017.
Michael and Milano encouraged victims of sexual harassment to tweet about it and “give people a sense of the magnitude of the problem”.

India’s Mee Too movement differ in key ways from the movement that is popular in United States. The allegations against Harvey were investigated by reliable sources, while in India accusations emerged on social media where women posted their grievances and they were judged and slut shamed for coming forward with their dark experiences. In addition, laws against defamation in India allows prosecution of women who are unable to prove their allegations with a maximum jail term of 2years.
While the First Amendment was passed, to protect such rights in the United States, activists began to work towards strengthening the awareness on Sexual harassment of Women through encouraging them to voice out and fight for their rights (Prevention Prohibition and Redressal) Act, 2013. Sadly noted, the amended Act has been implemented poorly since it’s establishment, both in India as well as the US.

What mental trauma do they go through?
The mental trauma haunt the victims for years, sometimes it is also carried within themselves throughout their lives. Our keen thought over this matter gives us a question – how does the victim find solution to come out of the trauma of sexual harrasment? We as a society, coexisting to brace the need of healthy relationship and living, have to be mindful that the effects of untreated trauma can be devastating and infiltrate in every aspect of women’s life. Thus, creating a space for them to recover is a sign of building a happy and healthy atmosphere to overcome the trauma they’ve been through.

What is the next step of #Meetoomovement ?
The movement has focused on survivors of sexual assault and rape, while also sparkling much needed conversation surrounding consent and gray aspects of assault.
Which has contributed much to the bloom of the next move,
” Times up movement ”
Is also a movement against sexual harassment and was founded on January 1 2018, by Hollywood celebrities in response to the Wiensten effect and # Mee too movement.
Closer to the scene is our homeland India, we have actors like Tanushree Dutta accusing co-actor Nana Pataker of sexual harassment and many other actresses are still being assaulted.

But are these movements an answer for all our questions? Is the movement enough? What do victims of sexual assaults need to do in order to get justice in ordeal?
The law in India protects women from sexual harassment under the provisions of Indian Penal Code.
Why are sexual harassment cases unreported?
Mostly women in India are thought to ignore the sexual harassment at workplace, home and anywhere outside. In India, the practicality still remains hushed and the victims speak out, only when someone forces them to protest against them – per se, only with a proper support from their close surrounding.
Also the fear of inquisitive and sexist questions by the police and judgement by the society play as a barrier for these women victims, in seeking a legal help.
Are women always right?
No! Women are always not right. It varies according to situation and the intent. Many a times, the question itself is very subjective, given the streotypical image that women “ought” to be right in all possible ways, and that they’re the most probable victims in whatever accusations. If logic has its ethics then we humans are prone to make mistakes. A doorway or to enlighten ourselves by learning from one other and the mistakes we’ve made, endlessly, is a way of strengthening oneself. Therefore, not even super power is always right.
Conclusion :-
I sincerely hope that we people – the society, become sensitive towards the victims and also hope that the legal system in India provides timely justice to the ones who believe in the system.
We must come together in support of the victims and speak out whenever we see such crimes and the violation of one’s rights.

Its time to stop the narrow minded, from putting women away from moving out of their houses at ANY TIME of the day. Also, stop people who contribute in pushing the victim to a state of mental trauma and ecouraging a stereotype, to sacrifice their lives for a hideous crime like SEXUAL HARASSMENT.
# MEE TOO MOVEMENT
Should get a proper JUSTICE.
Let’s all fight for EVERYONE who needs our support, to perform and enjoy their rights.