Existential angst is not self-inflicted rather induced by the society we inhabit, the ecology we observe from and the experiences we encounter in different walks of life. Langala Deha, Dami Poshaka (Naked Bodies, Costly Attires), a collection of four short stories by Bahibala Akshaya is a commentary on the various forms of existential angst. These deep rooted personal narratives are sheltered in a milieu which habitually brushes everything under the carpet, a milieu which has proudly lived the facade of “bhadralok culture” for far too long while discouraging any form of counter-normative dialogue in a supposedly democratic society. It is in this hetero-normative appropriation of culture and living, the characters find subterranean spaces to rebel for autonomy over identities. 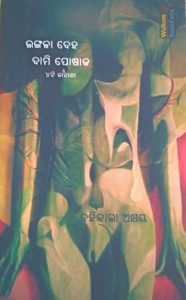 Nua Dhoti talks about the repressed sexual anxiety of a young man originating from abuse while featuring the contrast between personal experiences and people’s perception of events. It legitimises a sense of protest, a silent auction of defiance in the context of life and death. The loin cloth is used both as a material as well as a metaphor to disseminate the power struggle of two human bodies inhabiting the same space. Assaulted bodies are capable of carrying memories beyond the graveyard and this story is a gentle reminder.

In Swargadwar o Samalingi, the author examines the interplay of masking and unmasking of characters through different sensory experiences. The story is multi-layered, addressing the laments of an outcast in a letter, presenting the stench of decadence and a hypocritically moral order of living. It exposes a society that treats selectively, often sub-humanly because of the choices an individual makes. This society forces people to stay in the closet, not to embrace their sexual preferences while exploiting the same in the guise of a civilised community. The author here attempts to expose the leisure and pleasure the community seeks by victimising gay/lesbian bodies as consumable material constructs.

Room No. 312- Khaiba Order: Aalu Bhajaa o Ruti is expressed in the form of a black comedy. The author uses this situational narrative to juxtapose the helplessness of two needy individuals- a rookie hotel receptionist and a sex worker. Hunger seeks an allegorical address here which the author wishes to convey, both through the needs and wants of the primary as well as secondary characters. Jayanta Mahapatra’s poem Hunger might find an able companion in this piece as both discusses similar forms of hunger- for food and sexual gratification.

Kokei ra Chha Khanda Baunsa is a compelling point of view of a bamboo which acts as the sutradhaar. It clinically examines the absurdity of a degenerating Brahminical system which identifies with one set of values and feeds on religious-ritualistic lines. Introducing the readers to the so-called sub-strata of society, the story explores the void in cosmetic needs and nature of people trapped in the cycle of caste and segregation. The bamboo observes the family of a dead man and others who are seemingly forced to volunteer, their tales of indifferent participation, their indulgences and struggles to get rid of the mortal remains. While both the geographic spaces, Puri & Swargadwar play aspirational characters to white collar upper caste people, residual pains of the labourers residing there await new enactments.

Away from the intent of producing general esoteric output, the author has bravely explored socially problematic subjects, tabooed themes, an underbelly of desires and deceits in these stories. The characters reflect similar concerns like K in Kafka’s The Trial, Meursault in Camus’s The Outsider or Kaaul in Govinda Das’s Amabasya ra Chandra (an Odia classic). The minimalist approach in terms of presentation is well guided by the shock value these stories organically generate. Let catharsis find a new meaning in the re-humanisation of these flawed beings whom we categorically love to ignore!