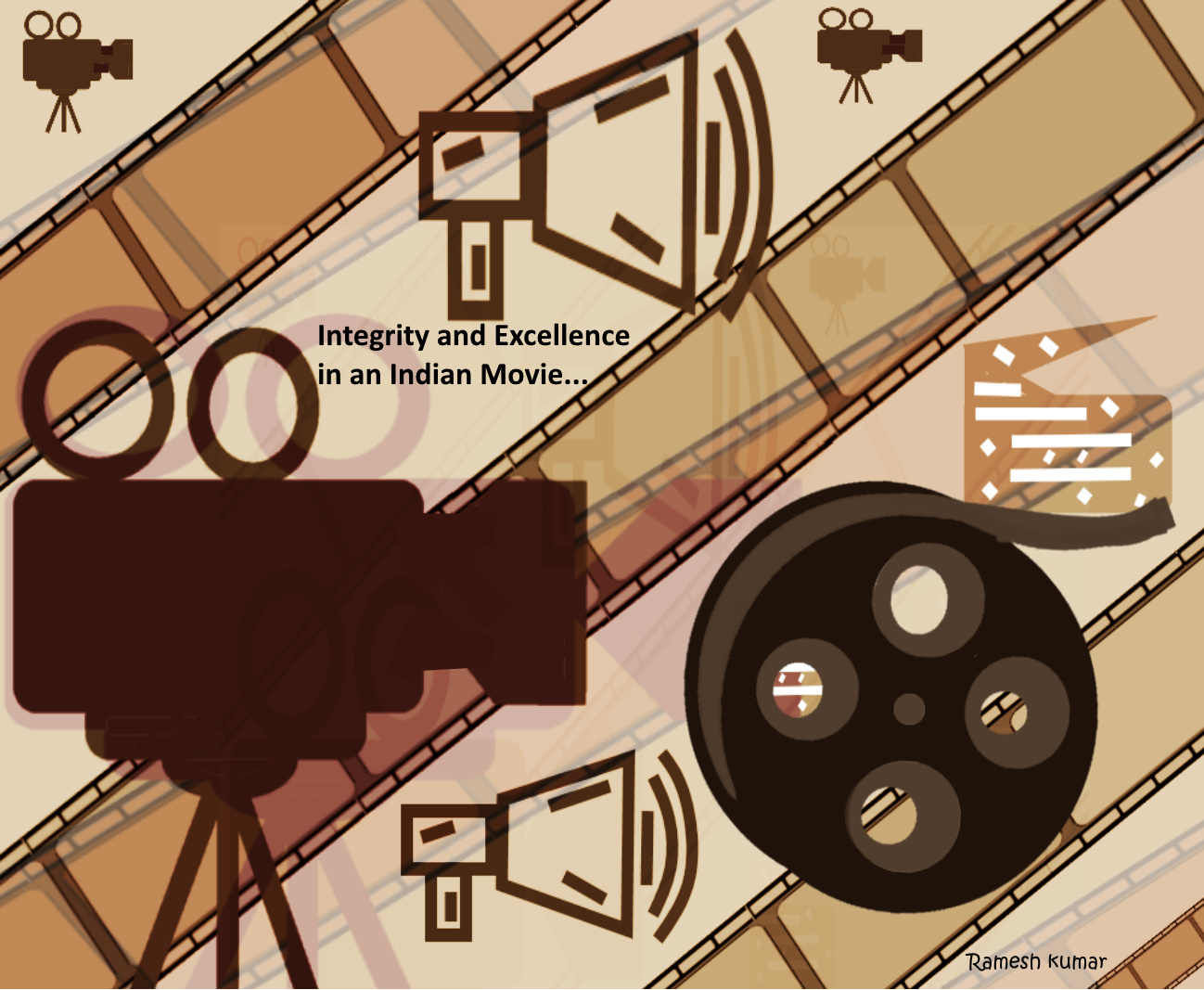 Integrity and Excellence in an Indian Movie…

Movie is a modern way of entertainment and a medium of expressing one’s quest for answers to some difficult questions concerning human condition. To cut it short, movies allow some people to live through fantasies and some to express lofty ideals and tough realities. To fast forward, some movies offer only entertainment while some touch up on interesting ways of constructing, deconstructing and, reconstructing knowledge about various human values such as integrity, excellence, respect and so on. Interestingly, these values play a significant role in making and unmaking of the ways in which we govern our lives individually and collectively. These ways have been labelled by some as systems, processes, networks, institutions and so on.

However, political scientist Mark Bevir prefers to call these and related ways as traditions of governance. Governance “… refers to all processes of governing, whether undertaken by a government, market, or network; whether over a family, tribe, corporation, or territory; and whether by laws, norms, power, or language” (Mark Bevir). And, a tradition is “…a set of understandings someone receives during socialization. So, a governmental tradition is a set of inherited beliefs about the institutions and history of government…”   (Mark Bevir).

Simply stated, traditions of governance are the ways in which we construct, deconstruct and, reconstruct human values against the backdrop of our past experiences. This is undoubtedly applicable to the two important constituent values of leadership, namely, integrity and excellence. However, one may critically ask while pondering upon these values, what a movie has anything to do with traditions of governance?  Especially, how can one link integrity and excellence to a movie’s plot?

A few years ago, I had the opportunity to watch a blockbuster Indian movie called Bahubali – a two-part commercial movie, The Beginning (2015) and The Conclusion (2017). I kept on relating the movie to different traditions of governance from then on. Lately, I couldn’t resist my quest to think about the movie from the angle of leadership skills in general, and integrity and excellence in particular. So, where do these two values find space in Bahubali?

Bahubali projects these values against the backdrop of a mythical tale which broadly falls within a medieval tradition of governance dominated by feudal forces. It is a tradition of governance wherein rule means what the ruler (Sivagami) declares it to be: “My word itself is the rule” (“Mera vachan hi shashan hai”). But, can there be any space for integrity and excellence in a such a scenario wherein rule is nothing else but the words of the ruler(s)?  Stated alternatively, is it possible for anyone to cultivate these values in non-democratic traditions of governance?

Arguably, one might say, yes! One may go on to justify this position by stating that integrity and excellence are not dependent on a particular tradition of governance.  And suitable examples may be Bahubali’s demonstration of leadership during (a) his army’s motivation dilemma amid a battle against the enemy (Kalakeya) and (b) his times with ‘common man’ after dissociation from the royal palace. In the first example, the leader fuels moral strength into his army by removing their fear of death and by marching alone (for a bigger cause) toward the enemy amid a chaotic war scene. In the second example, Bahubali brilliantly builds up a well-functioning water supply unit by making use of available natural and human resources.  In the above examples, the leader turns out to be a guide, role model, and a reliable companion in the times of crises.

Interestingly, however, integrity and excellence in governance is apparently not a one-way affair. These values are nurtured and exercised in a particular context of events and are, therefore, dependent on the nature of interpersonal relationship between individuals operating in a particular context. This is again well-projected in Bahubali through the life of Devasena (the princess of Kuntala). Devasena refused to marry Bhallaladeva because the ruler (Sivagami) did not seek her consent before declaring her as Bhallaladeva’s bride. Devasena’s refusal and Bahubali’s determination to protect Devasena’s self-respect are demonstrations of personal integrity by leaders.

But one may ask, when and why personal integrity becomes important? Personal integrity assumes importance when it is linked with one’s professional commitment. Both Bahubali and Devasena were potential candidates for rulership of their respective kingdoms. An individual performing as or aspiring to be a leader needs to earn all the required values of leading a team. But what about excellence? This is dramatically demonstrated in the movie through the life of Mahendra Baahubali (son of Bahubali). What matters to a leader is not the limitations imposed by scarcity of resources, instead it is the opportunities offered by available resources in accomplishing professional goals. Mahendra Bahubali’s sustained efforts and eventual success in reclaiming the lost kingdom amid a hopeless situation reiterates the point that a leader is made not by the accident of birth but by one’s life experiences grounded in the values of integrity and excellence.

Yet another example which demonstrates these values is the life of Bahubali’s personal assistant, Kattappa. Filled with loyalty and commitment to professional ethics, Kattappa establishes leadership skills in the following activities: (a) dialogue with an arms dealer amid a demo of excellent war skills and (b) aggressive defence of leaders at the top of the feudal hierarchy. Kattappa’s demo of war skills and his refusal to rid himself of the royal service during crises displays his commitment to professional excellence and integrity.

Besides, this sort of heroic projection provokes one to think beyond the given tradition of governance. Arguably, if these values can be cultivated and demonstrated in a feudal setting, then what prevents one from transforming them into a reality in a democratic setting? And one may answer affirmatively. Nothing prevents one from realizing these values. One may cite a number of movies to support this position. However, one may wonder, that was all about reel life… How about real life?

From a realistic perspective, one may certainly answer affirmatively. Yes! it is quite possible to demonstrate these leadership values in real life events. History is replete with examples of integrity and excellence demonstrated by leaders during normal and extraordinary times. For a familiar example, one can refer to the Indian freedom struggle. So, one may argue, it is a truism that there are multiple ways to establish higher level of integrity and excellence in one’s professional life. And that these leadership values can be evolved and refined by anyone (loaded with the power of will) in any tradition of governance and in any field of human life.