Democracy is widely viewed to be the most effective way of governance. What could be better than an administration that is elected for, by and is of the people? It is indeed the best thing that could happen to civilization, as it gives every citizen the power to influence the future of their country. Yet unfortunately, like all the great things this world has experienced, democracy too has its Achilles heel or rather, several heels.
To start with, in a country like India where even a state assembly constituency has lakhs of voters, a person coming from a poor or middle class family with a genuine passion to serve the nation would find it very difficult to make himself/herself known to the voters as they cannot afford to spend several lakhs or crores of rupees in election propaganda. Social media has helped to bridge that gap, but it is still a distant dream to communicate with everyone in a constituency. 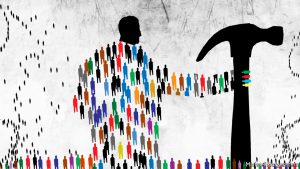 Therefore only wealthy business people manage to influence elections either by directly entering politics or by supporting candidates who are loyal to them. It is pathetic that at least 8/10 times these candidates turn out to be mere puppets of their paymasters without any authority of their own, and this completely defeats the purpose of democracy and is also the root cause of corruption and other irregularities in the system.
Secondly, A person occupying a ministerial post is generally an elected representative and though that person may be famous and popular among the people, he/she may not even be adept at managing household finances, let alone that of a state or a nation and yet that person may be awarded the finance portfolio. An uneducated person may become an education minister and whilst that person may have a lot of knowledge and understands the problems in education, that person would undoubtedly fail to understand several inner workings of the private sector and the minute yet significant details in government-run schools, as the minister will be dependent on his/her subordinates and can be easily misled. There is also a scenario, where the election funds could have come from these private sector schools.
This is the same scenario in all the other departments, as the person heading it generally has no expertise in that field or has received election funds from ‘friends’ whose organisations fall under the governance of that particular ministry.
Lastly, while wealth has influenced politics since partition, rampant corruption has ensured that politicians became wealthy and have an attractive career option for their family members. Hence we have seen the same families generations after generations, having managed to be at the top of the food chain and to have built an intricate network of loyalists in every law enforcement agency. This has created anarchy within a democracy and a voter has no choice but to choose one anarchist from the other. Besides, a party in power always focuses on short term goals and projects to impress voters and garner votes and this mindset sets the nation back in the long term due to the lack of proper vision and commitment.
So, what has become of the dream of democracy for a free India? We have been colonised again! Only this time it has been done by the people of this land. The fundamental problem of democracy is that is based on the assumption that every one person who takes an oath stays true to it and the foreign invaders have been replaced by looters, murders, anarchists and greedy people who only have business interests.
So, are we faring any better than we did during the British rule? The answer is complicated.
Writer’s view:- Despite listing several shortcomings in our democracy, I strongly believe that democracy is the way forward and it is the responsibility of every citizen be it an adult or a child of this country to be vocal, proactive and find, oppose and correct these misgivings in our democracy to fulfil the dream of a free India.
– Maddali Havish Kumar